The locks allow canals to traverse varied terrain in a controlled manner.  The canals connect various river valleys (i.e. the Canal du Burgogne connects the Seine with the Saone) passing over the intervening hills. The locks allow boats to climb mountains!

Each lock consists of two sets of doors and two sets of gates, usually part of the doors,. The doors allow the boats to pass, the gates allow the water to pass. To ascend a lock, with both sets of doors closed and the lock full, the lockeeper will open the lower gate allowing the water to flow out of the lock. When the water in the lock has reached the lower canal level, the lower doors are opened allowing a boat to enter the lock. The lower doors and gates are then closed and the upper gates opened, allowing water to flow back into the lock from the upper canal. When the lock level reaches the upper canal water level the upper doors are opened allowing the boat to exit. The process is repeated in the opposite direction to descend.

Some of the locks are completely manual, with the lock keeper (with sometimes help from a boat crew member) cranking open the doors and gates. Some of the locks have hydraulics to open the doors and the gates are manual. Some have manual doors and hydraulic gates and yet others are fully hydraulic with the lock keeper standing at a control panel. And yet others are completely automatic with no lock keeper present, relying on the boat operators to initiate the lock cycle (usually with a pull cord located outside the lock to request access and another pull cord inside the lock to begin the cycle). You really never know when approaching a lock what you will find.

A lock cycle can take anywhere from 5 minutes to 20 minutes (or sometimes much longer if there is a line of boats waiting or you have a particularly loquacious lock keeper).

The depth of the locks (how much the boat rises or lowers) various dramatically. We have been in the 10.7 meter (35 feet) Canal du Centre lock off the Saône and in a 0.48 meter (1.5 feet) lock in the Canal du Nivernais but they are typically 2-4 meters. In the deeper locks, going up, the lock keeper usually lowers a hook to take your line to attach it to a bollard on the surface. Some of the deep locks have floating bollards that go up with the boat.

Locks are really very simple and quite safe. The only really bad thing you can do is tie off your line to the boat (rather than holding it loosely). When locking down, if the line is cleated, the boat will “hang” as the water level drops. I’ve seen this happen and it is quite scary. The boat ends up hanging off the line until either the line is cut, breaks or the cleat pulls out of the boat. The boat then drops the 5-10 feet to the water. Once the boat starts to hang, the line cannot be released, it has to be cut. Most of the regular cruisers carry knives for this purpose or have one very handy. 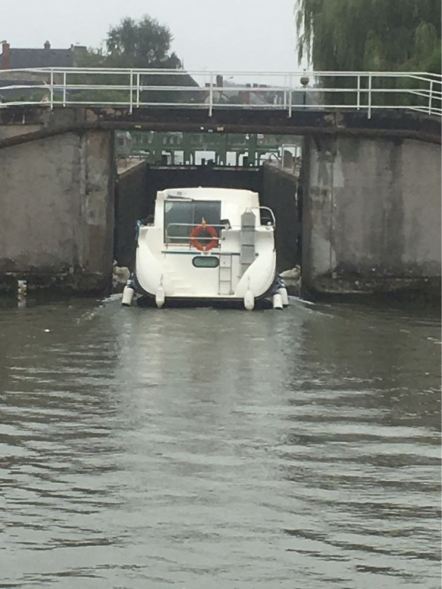 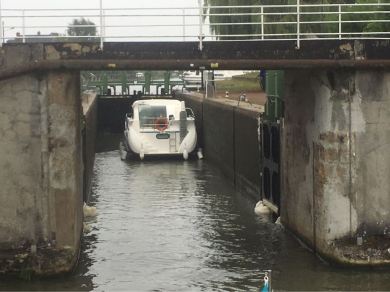 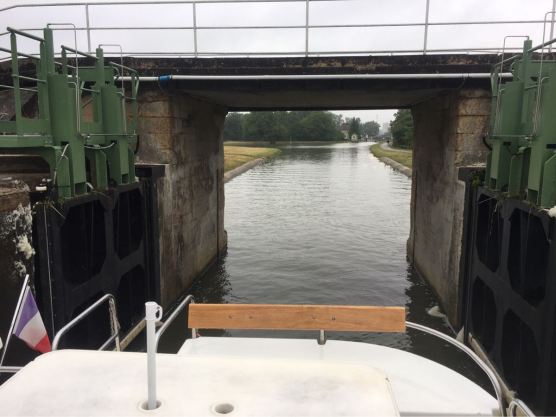 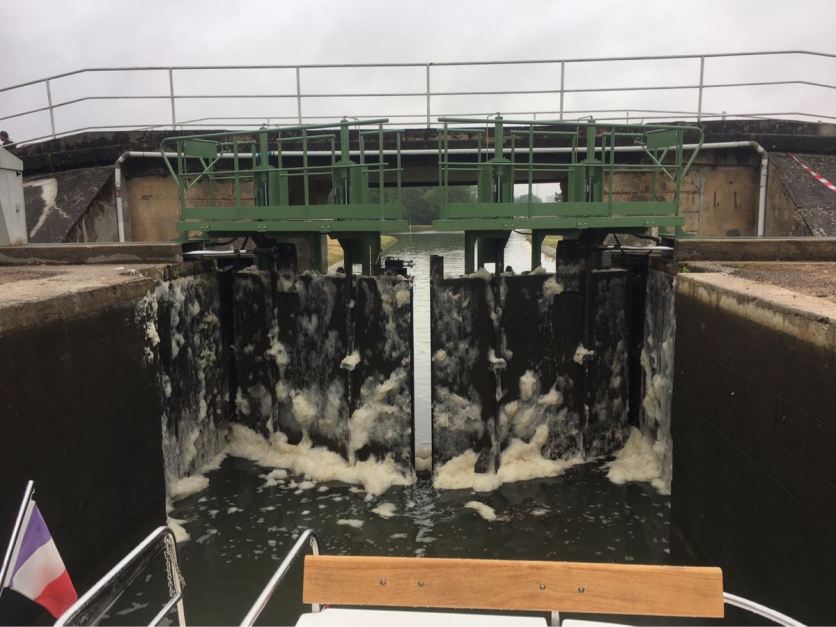 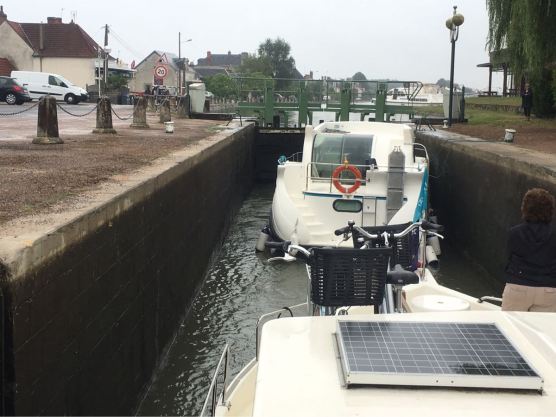 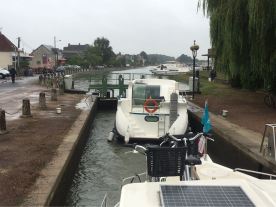 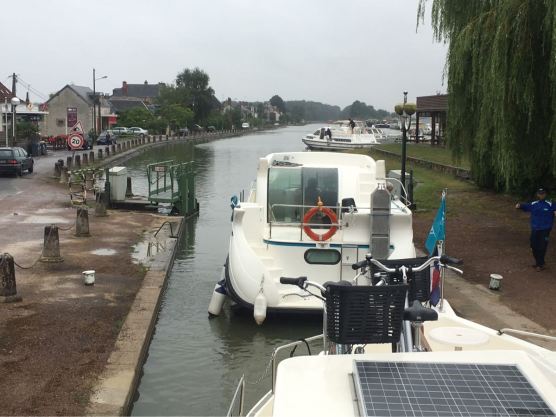 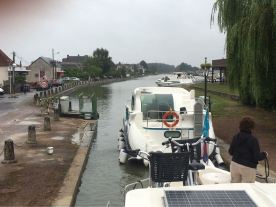 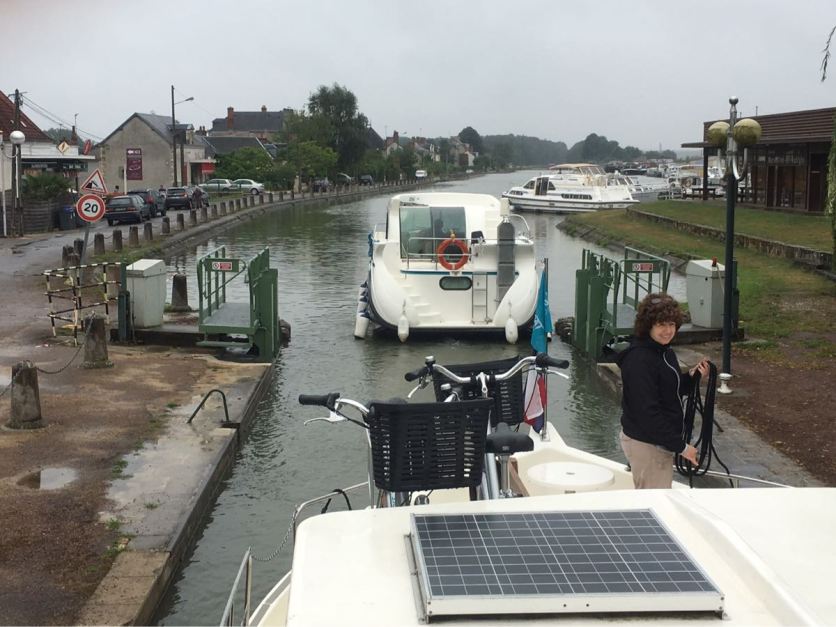 And here is a sequence for locking down. Note that this is an “automatic” lock – there is no lock keeper. 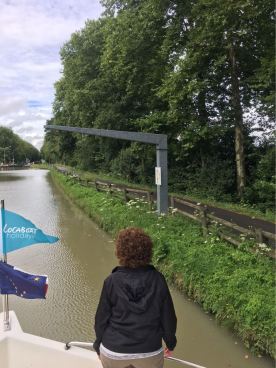 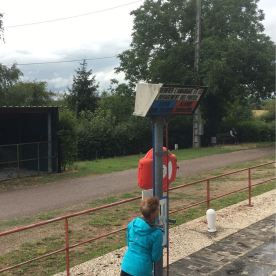 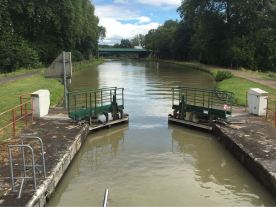 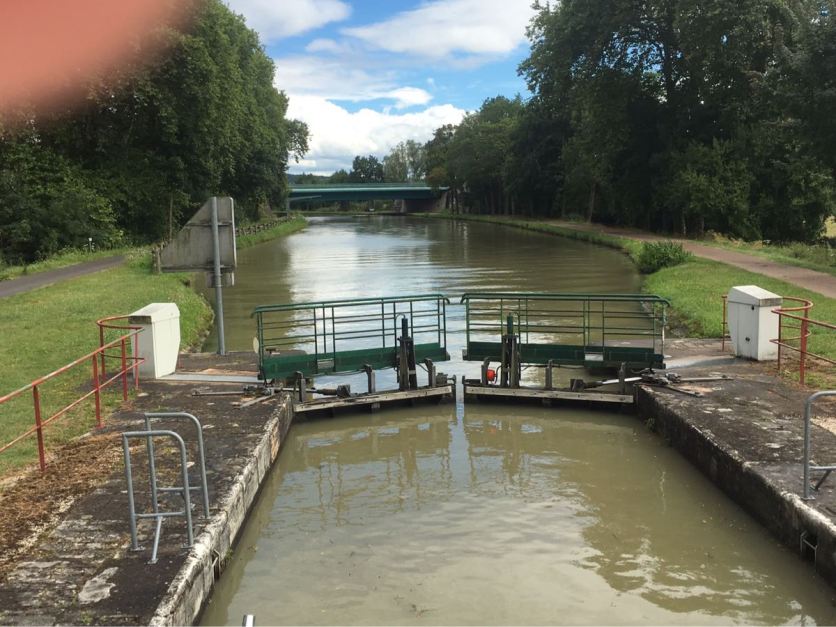 Upper doors close behind the boat(s). 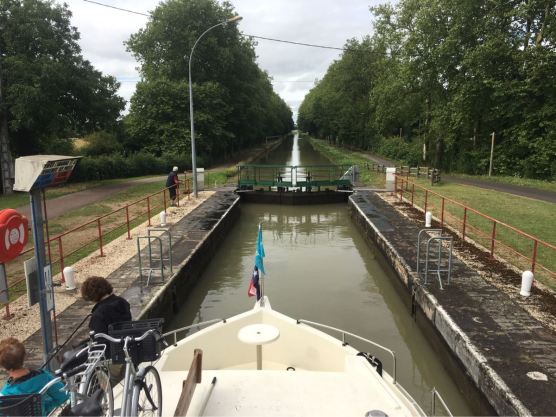