To help with the effects of jet lag (it’s a 13.5 hour flight from New York and a 10.5 hour time change) we elected to spend a few days in Delhi on our way to Kathmandu.

Our connecting flight from Houston to Newark was delayed an hour (thanks United) so we ended up jogging through the terminal at Newark to get to our gate just in time.

The Delhi airport was nice, we were through immigration and customs in 15 minutes and, miracle of miracles, our luggage made it.

The air here is bad – and they are having a 1/2 marathon on Sunday!

We spent a day touring the city, visiting the place where Gandhi spent his last days and was assassinated; the largest Sikh temple in Delhi; and the spice market in Old Delhi.

My favorite was the Sikh Temple – I love how everyone is treated the same and they practice community service (rather than just talking about it), feeding 10,000 meals a day to the city’s poor.

We had to wash our feet and hands and cover our heads to enter the temple. Then we went to the markets in Old Delhi.

Our hotel is in the Janakpuri district of Delhi, about 10 miles west of the city center. It is a fairly typical neighborhood but not a tourist area. On the plus side we are not bothered by hawkers and beggars and we see how the majority of the people live. On the minus side there are not a lot of tourist things to do nearby.

Besides seeing cows and monkeys in the streets, probably the biggest surprise is the sheer volume of garbage everywhere.

Besides riding in a powered rickshaw we also took the Metro which was a stark contrast to the rest of the city. It was spotless, efficient and built in only 17 years. No pictures because photos are not allowed.

Agra and the Taj Mahal

We spent one day visiting Agra. We booked a tour online and it worked out well. They picked us up at the hotel, took us to the train station, met us in Agra and provided a tour guide.

The first class train ride was about $20 person and included breakfast. Agra looked a lot like Delhi with worse roads. We spent about 3 hours at the Taj Mahal and it was amazing. Words and pictures do not do justice. It is the most beautiful building I have ever seen.

After lunch (and the requsite “shopping visit”) we visited the Agra Fort. This was also built by the Mughal Emperors and is still used as a military installation (so only about 20% is open to the public).

The fort served as a royal residence to the Mughals and was also where the 5th emperor imprisoned his father (the one who built the Taj Mahal) for 8 years.

It was originally built entirely of red sandstone but later emperors rebuilt part of it in white marble with precious inlayed stones like the Taj Mahal. 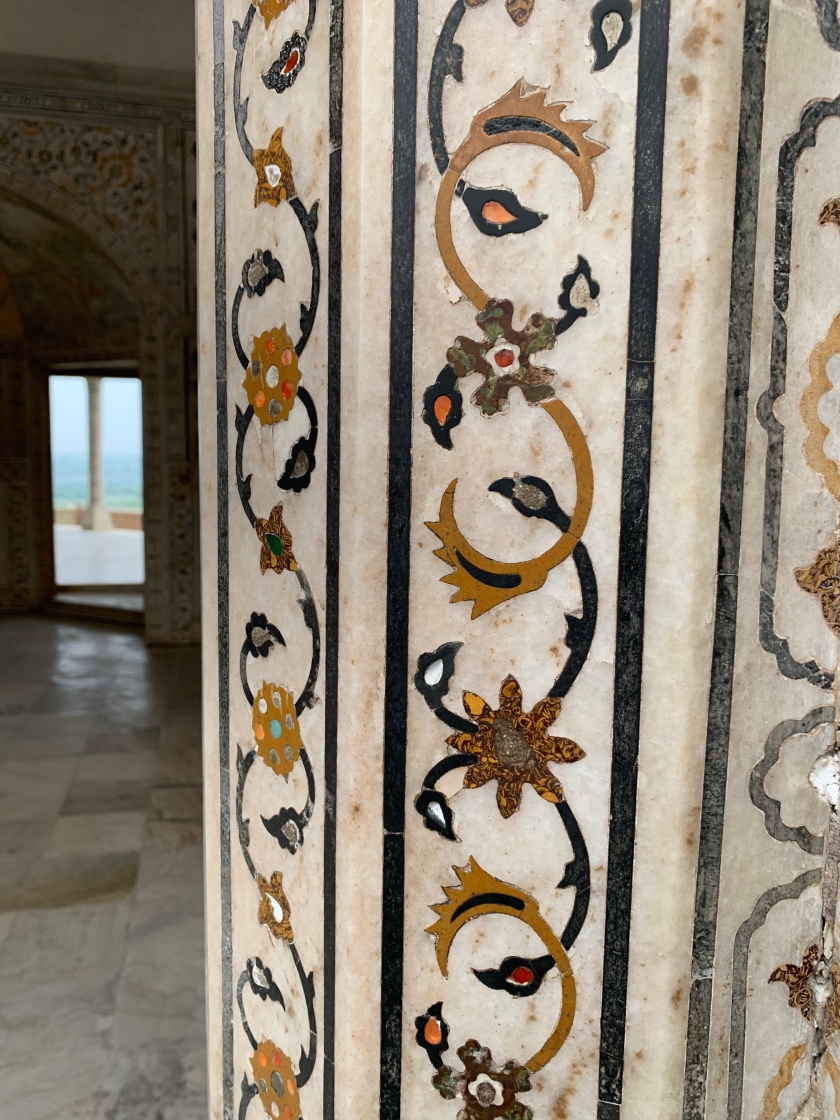 Next: Kathmandu to Namche Bazar