Okay I am now five days from the start of my little adventure. And it is appropriate to ask…

So just how dangerous is it?

The following rigorously compiled list of fatalities on the PCT is from PCT Fatalities:

I don’t think you can count on the ALIEN ABDUCTION statistic. I mean, they could have abducted lots of people and brainwashed them. I was kind of surprised there were no heart attacks. Speaking as a 59 year old.

So, number 1 is “falling”, followed closely by cars. This is not a big surprise. 80-90% of the trail is along mountain ridges. But the real problem is snow. Traversing a steep slope that is snow covered can be dangerous.  I plan to have my micro-spikes (mini-crampons) and ice ax when and if I hit those spots. And I will be skipping over the highest part of the Sierra this year (since I did it last year) . The picture below shows my friends Jim and Leigh Ann  coming over Forester Pass (the high point on the PCT) last year. This is late June in a very low snow year.  We did NOT have spikes or axes because we had talked to some south bounders at Kennedy Meadows and they said they were unnecessary and they were right. 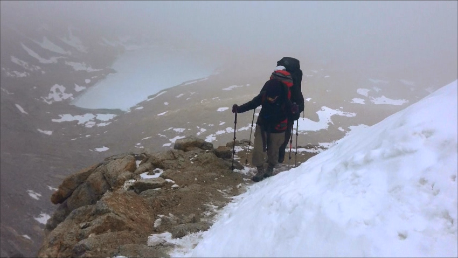 Next is cars. Another no-brainer. You do have to cross some major freeways (I-10 comes to mind) and hitching requires standing near moving cars so I guess I understand this. Gotta be safer than walking in Houston though!

One thought on “Dangers”